The night before boarding for London, my friends and I went out for my birthday. Great dinner spot called www.kinmontrestaurant.com and afterwards went to a rooftop spot in the Gold Coast Chicago; needles to say, I had a little too much birthday turn up and champagne...and whiskey...and maybe a glass or two of pinot grigio. That was a bad idea. In my mind, I thought it would be totally okay. I was on an evening flight to London, so everything would be fine. No problem. Wrong. Wrong on so many levels. The flight was brutal. On top of being hungover, their was serious turbulence. Thank god I had packed my own chamomile tea for the plane and sleeping pills; in less than 2 hours; I was out. Travel Hack Tip: when on a long flight, make sure to pack chamomile tea and soothing music. it will help the flight go along faster. Only use the sleeping pills if your flight is at night. ​

My first thoughts when getting out at London Heathrow were... "Do I have a layover in NYC". I was surprised at how similar the two cities are. As I was heading to my airbnb.com I was able to see a lot of the city. Travel Hack Tip: If you want to see the city as a whole, and enjoy the local neighborhoods and people. Rent an apartment or house. I use airbnb.com, but there are other places that are great also. If you are lucky enough, the people you're staying with, give great recommendations on the area and other places to go besides the typical tourist places.

Second thought, where can I get something to eat. The neighborhood I was staying in, was extremely charming called East Finchley. It was right off the train, which is perfect when you get an www.airbnb.com. But of course in true Amber fashion I decide to go the opposite way, and got lost for about 30 minutes. I got to see the neighborhood though! By the time I got to my www.airbnb.com, I was exhausted. I told myself, I'd go to sleep for a couple of hours and wake up and get something to eat. Those couple of hours, turned into two days later. I literally lost a day in a half, because I was jet lagged and hungover. Never again. Never. again.

Now that I was finally up, it was 1pm, and I was starving. Everywhere I was looking to eat was selling fish and chips. Let's get something clear, I am not a big fish person, and Im not paying to eat chips, thats not going to happen in a foreign country. So I looked around for other spots that looked more appetizing, as I was searching I came upon the main area for sightseeing in London. In a matter of 20 minutes, I saw everything, . Big Ben, Westminster Abbey, Parliament, Buckingham Palace...you name it, surprised that I was able to see all of the main attraction's in less than an hour, I really didn't know what I was going to do. They were all in the same area. So it left me a little annoyed with London, along with not having the food I wanted, I was officially done looking at all the popular spots before dinner. Needless to say, I was annoyed.

I finally settled for a really cute Italian place on the corner of my street called Bufi . The owner was so nice, and I met two young women while at the Italian spot. I was so excited! one, for the first time sense I left the states, I saw black women that looked like american black women and they also looked like my age. I was hesitant at first to ask, but I just did it. "Hi ladies, can I ask you a question?" Ladies: "sure" Me: "Where are all the black people that look like you guys, around here?!?" Ladies: "hahahahah, you want a drink.." Their names were Fiona and Sabrina, we sat at that restaurant for about three hours, laughing and talking about black americans vs. black people from the UK. It was a very interesting conversation, that gained a lot of perspective into how things are in the US vs. other parts of the world. To others, they actually empathize with black people here, along with thinking we're pretty cool. One of the main things I enjoyed, was that people were just people for the most part in the UK. You have your set of friends, and thats it, color is second to building friendships. Long story short, we exchanged numbers and promised to try and connect, while I was still in London. The next morning, I felt far more relaxed and ready to begin my day. One of my best friends from the states, was living in Amsterdam and on a whim, had to come to London for business. Neither one of us realized she would be there, but when we found out. We had to connect, and thank goodness I did. I was able to take the train, to see more of the city and learned how to get around. The best part about other major cities around the world TRAVEL TIP: Google Maps works everywhere, and connects you with trains and metra's all over the city. When I got to the main train station that I was meeting Julie, I was surprised at how big the train station was. This particular train station is one of the biggest connecting train stations for Europe. It was like being in an airport. Unlike the states, the train is a serious means of travel in Europe. I still dont understand why we dont use them more, but whatever.

As we got to the restaurant, I saw the sign again. "Fish & Chips", here we go again. Of course, the first thing that came out of Julie's mouth "Oh my gosh, Amber. you have to try the fish and chips" With a tad bit of the rolling of the eyes, I decided to try them. She actually explained to me that chips are fries and fries are chips. When the food came, I was actually impressed with how good the battered fish was. The irony of myself and Julie having fish and chips together, was that; about 3 years or so ago, we had embarked on a Candanian road trip that led us to a fish and chips restaurant before. At the time, we felt it necessary to recreate a beloved song as we ate our food. In honor of the road trip, we thought we would recreate that magical moment. (see videos) How did we sound? Amazing right. I know, you dont even have to say it.

Going into the last day of my trip in London, I decided to get up early and make the day worth it. Go to a cool neighborhood or two and see more of how the locals lived. Dave, my airbnb host suggested either Shore-ditch or Camden Town. He stated that both of those areas had great things going on, with a cool hip vibe. So I decided to check out Camden town first. I fell in love. There was so much going on, if you've been to Wicker Park in Chicago, it carried that same feel, but far more diverse,eclectic and bigger. I was so upset that I just had one day to enjoy this neighborhood.

The one cool thing about traveling alone, you dont have to worry about anyone else's schedule. You also are able to meet other people along the way, everyone is intrigued by solo travelers, they almost pity you and want to entertain you! After I got something to eat from this amazing burger spot (see top photo),places to sit were few, and in parts of Europe, its not uncommon to sit at another persons table. I saw a couple sitting at a bench, and they looked to be a spot right next to them. I asked them if I could sit next to them. When I sat down and started talking to them, it was like I had known both of them for years. Apparently, they had met the night before, and decided to continue the fun into the next day. The best part about the couple was their "love" story; she spoke very little english, and he was an english guy. He would leave to get more drinks and she would say how much she was falling for him...he would come back, she would go to the bathroom and he was telling me "I'm just into a good time, not looking for a relationship". Those situations are always awkward for a number of reasons, Every woman that has heard that statement from a man, and has stayed around not believing him, knows how that story goes. Secondly,I was having a hard time explaining to her in English & Spanish "he isn't feeling you like that, dont invest to much time...THIS MIGHT BE THE LAST DAY YOU SEE HIM (in my slow ignorant american style voice, as if she understood my voice slower"., I even tried calling a friend to ask her how to say "dont be a hoe" in Spanish...that was pretty great on so many levels. Finally, the most obvious reason I shouldn't get into this "lovers" situation is..I JUST MET THEM...I DONT LIVE HERE...

None the less, we had a blast, we spent the rest of the day with each other, hanging out and site seeing. As the evening was coming upon us, we went to this cool spot called wonderland bar, and one of the girls I had met the 2 nights ago Fiona, met up with us, that made the night even better! The bar we hung out at was so nice, very laid back, live music and great drinks. As we sat there, we met more people, a friendly couple the gentleman from Portugal and the woman from Poland originally. It was a pretty great experience,being the only American. It wasn't about being black american or a person of color. I was just american, and got joked and picked with being just American. The irony of that, people from the UK particularly England are clumped in with Americans a lot globally, which ill talk about later. People are so intrigued with the United States, and always have so much to say,and of course I took the best time to travel around the Trump/Hilary election. People in Europe no more about American politics than you think. Make sure you know your stuff before you get into a discussion about politics overseas, or you'll be the dumb American they think we all are. The world is watching. With that said, Myself and Fiona left and went to get some amazing food from a local caribbean spot and sad our good byes, promising to keep in touch and staying connected. It was time to leave London, I had a 5 am flight to Ireland, to meet my friends for Irish culture and long beautiful drives along the Irish coast...so I thought. 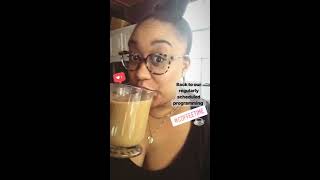 People will think you're a liar. Whatever.